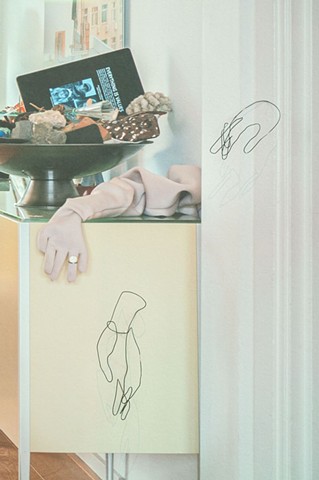 Margaret Munchheimer (Lakeport, California USA, 1976) considers craft a tacit “body knowledge” that resides within the brain and muscles. This discourse takes on a new perspective in a digital era, where hand-based technologies are often rendered obsolete, and where jewellery can seem like a very old-school practice where touch, pressure, and unmediated tactility play a huge role. Munchheimer’s Alphabet of Touch is an inquiry into how physicality is translated (or not) in a digital age of design. Her material research journey has led her to working with iron that she manipulates into outlines of hands, which, when put against a white backdrop, resemble line-drawing made in 3D digital image rendering software. Ironically, their shadow on the wall is then a 2D version of a 3D object. Considering Plato’s allegory of the cave, Munchheimer imagines how we can explore the messy space between vision, perception, materiality, and virtuality.