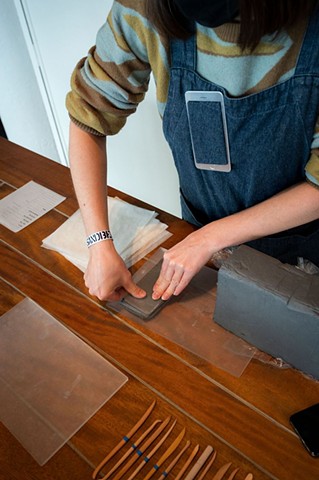 Morgane de Klerk’s (Lisieux, France, 1987) Hey device, show me privacy investigates privacy and surveillance technologies in the age of the smartphone: the increasing invisibility and dematerialization of surveillance, and how to position oneself against that as a maker of objects. De Klerk created a series of 9 aluminum pieces that serve as tokens of surveillance rather than having any actual function. They serve as decorative pieces that look like iPhones crawling up the pocket, surrounding the body; like shadows of the real thing. During the exhibition at Het Hem, De Klerk presents an interactive service where audiences can have free clay replicas made of their smartphones.