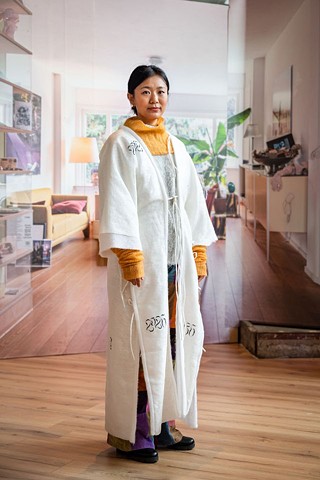 A WAY OF WEARING Ting Gong (Chongqing, China, 1989) is interested in garments as they are made, used, exchanged, and take on a life of their own between people and places. At the center of her project, A Way of Wearing, is a particular Chinese padded coat that belonged to a woman in a rural village, which Ting eventually purchased from her for a symbolic price. This seasoned craft object – over 20 years old – has led Ting to think about designing for and in an ongoing cycle of social exchange, considering how one can include social histories of production into the product itself. Her project comprises 20 coat replicas that will be passed on to friends who commit to a 20-year retainer period, in which they will exchange their coats yearly. By doing so, Ting explores how clothing itself can constitute a kind of social fabric and a commitment to each other.