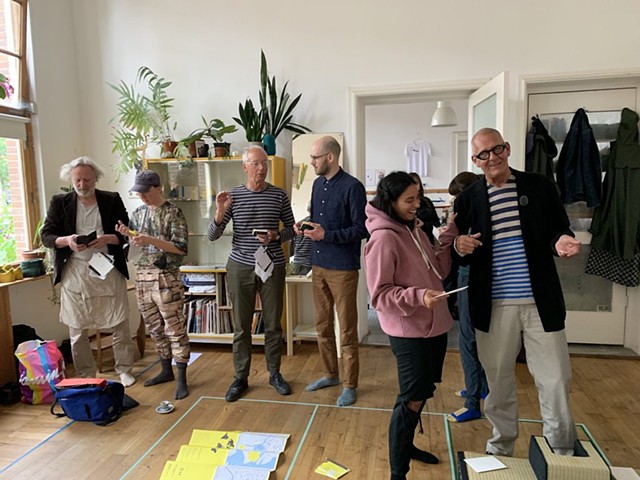 MASieraad is an initiative of jewellery designers Gijs Bakker, Ted Noten and Ruudt Peters, art historian Liesbeth den Besten, plus Liesbeth in't Hout and Leo Versteijlent. The designers are exponents of different approaches to jewellery (industrial, conceptual and visual) and the group as a whole has a wealth of knowledge, experience and an extensive network.

Gijs Bakker: Thinking Big on a Small Scale. Article from: Contemporary Jewellery, Mar 12, 2020 Gijs Bakker recently developed the MASieraad foundation that initiated Challenging Jewellery; a temporary Master’s at the Sandberg Instituut. TLmag caught up with Bakker to talk about the programme in the current changing field of design.

From the co-founding of Droog-design to his former position as head of the Master’s programme at Design Academy Eindhoven, it’s needless to say that Gijs Bakker’s legacy has been decisive for the current Dutch Design field. However, the Amsterdam based designer is active as ever recently having developed MASieraad together with colleagues Ted Noten, Ruudt Peters and Liesbeth den Besten. The foundation that initiated the temporary Master’s programme Challenging Jewellery at Sandberg Instituut in Amsterdam, which started in 2018. This experimental 2-year programme challenges the design of jewellery and how it relates to the contemporary, presuming an ability to understand ‘micro-working’. TLmag caught up with

Bakker to talk about the design of MASieraad.

TLmag: The MASieraad foundation initiated the temporary master program Challenging Jewellery at the Sandberg Instituut, Amsterdam. What prompted it initially?

Gijs Bakker (GB): We founded MASieraad based on the fact that in the Netherlands there is no existing master course in jewellery design, only one bachelor at the Rietveld Academy. And more importantly, we noticed that the development in jewellery design seemed quite poor in the sense that everything moved in a more decorative style. There were very few developments. That concerned us, especially as the Netherlands

played quite an important role in jewellery design starting after the war from the 50s to the 70s. We wanted to see if we could reclaim this narrative and continue a more avant-garde way of thinking about jewellery, which was one of the aims of the course.

TLmag: Your website shows a glossary of terms related to MASieraad, do these outline the philosophy of the masters?

GB: That is true, however, a practice taught us that the interpretation of the list depends on the tutors. Before we started we spoke with many colleagues. And at the very end, we decided that BLESS would take the role of program directors. The duo, Desiree Heiss (Paris) and Ines Kaag (Berlin), work individually and in collaboration. Mostly they work in fashion but seem to go beyond that. They are environmentally critical, aware of overproduction, and have a very strong urge to find the essence of what fashion can, or should be. So this, I would argue, influences the way of teaching by means of the glossary.

TLmag: How do you see the field of jewellery design changing over the past few years?

And what position do you see this MASieraad having in this movement?

GB: We see jewellery as a practice that is very intense that takes place on a very concentrated small scale. You could almost say it is forgotten in the world of today. A world where arguably all have internet, a reality of globalization. We think that we can think big, but in reality, we can’t.

As jewellery designers, we want to explore the possibility of working concentrated on a very small scale and try, to give meaning and input on that level. Once I had a conversation with Ingo Maurer about this and he mentioned: ”No, I can’t do what you guys can do on

the square centimeter, I can’t”. That’s the essence. And it is not literally on a small scale, but perhaps conceptually: dense, and very concentrated attention.

And we feel that for instance, for young engineers or architects this would be very interesting. These professions speak about people and their movement in enormous projects, using small maquettes. And often, you see that the human scale is neglected in many architectural ways. We feel it could be interesting for these professions to explore thinking on a very concentrated small scale. And then, of course, making the frame bigger and bigger.